Over the past decade, U.S. beef consumption dropped 15 percent while broiler consumption increased 5 percent. During the same period, pork consumption also fell (4 percent). The key factor driving these trends is retail prices. For example, in May 2016, retail prices were around $1.90 per pound for broilers, $5.83 per pound for beef, and $3.78 per pound for pork. Moreover, beef prices have risen much more sharply than broiler prices over the past 10 years. Between 2006 and 2016, beef prices rose 53 percent, mostly due to tight supplies, while broiler prices rose 12 percent. Other factors that may have contributed to the shift away from beef and pork consumption include growing health concerns about red meat intake and increased availability of convenience chicken products, such as skinless, boneless breasts and ready-to-serve offerings.

But meat consumption in the U.S. is likely to undergo a noticeable shift over the next decade as production of beef and pork grows and prices decline. USDA baseline projections, which provide a longrun view of the U.S. farm sector, show that production of beef and pork will expand steadily between 2016 and 2025, driven by lower feed costs and strong meat demand domestically and abroad. Beef production and pork production are projected to grow by 11.7 percent and 10.3 percent, respectively, during the period.

As a result of the anticipated expansion in production, beef and pork prices are projected to drop 10.6 percent and 11.6 percent, respectively, over the period, driving up demand for beef and pork and reversing a multiyear decline in meat consumption in the U.S. Per capita consumption of beef is forecast to increase by 2.7 percent by 2025, outpacing growth in consumption of broilers and pork, which are projected to rise by 2.3 percent and 1.7 percent during the same period. The rise in beef and pork consumption will increase the total amount of meat consumed per person in the U.S. from 211 pounds in 2015 to nearly 219 pounds by 2025. 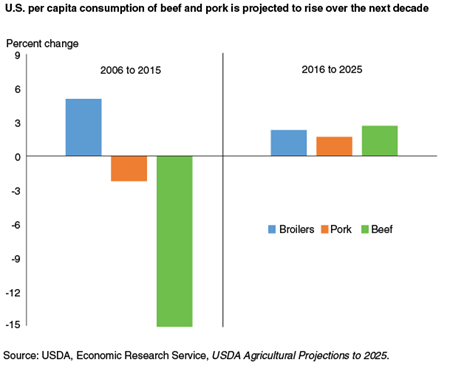