by Clare Cho and Joanne Guthrie

After a busy day of learning at school, most children are ready for a snack. Since 1998, USDA has provided funding for after-school snacks through the National School Lunch Program (NSLP). Schools that offer regularly scheduled after-school educational or enrichment programs can choose to take part in the NSLP After-School Snack Program and receive cash subsidies from USDA for each snack they serve. These snacks must include one serving from two of the following food categories: milk, fruits or vegetables, grains, and protein-rich foods (e.g., meat, peanut butter, or cheese).

The number of snacks served through NSLP’s After-School Snack Program grew from almost 140 million in fiscal 2003 to over 220 million in fiscal 2014. Despite this increase in the number of snacks provided, a recent study by ERS found that in 2010, only 27 percent of schools participating in NSLP offered the After-School Snack Program. These were primarily elementary schools with a high proportion of low-income students in urban, high-poverty districts.

USDA reimburses schools for snacks at varying rates according to whether a participating child is eligible for a free, reduced-, or full-price meal. For the 2013-14 school year, free snacks were reimbursed at $0.80 per snack, and reduced-price and full-price snacks were reimbursed at $0.40 and $0.07, respectively. If at least 50 percent of students enrolled in a school or in a school’s attendance area are eligible for free or reduced-price meals, the school is designated as “area eligible,” and all students receive snacks at no charge and the snacks are reimbursed at the free rate.

To identify schools and district-level characteristics that are associated with a higher likelihood of offering the NSLP After-School Snack Program, ERS researchers analyzed data from USDA’s nationally representative School Nutrition Dietary Assessment Study IV, which was conducted from January to June 2010. Nearly all of the schools (92 percent) taking part in the snack program had at least 50 percent of lunches served free or at the reduced-price. Most schools (75 percent) that offered the program were elementary schools, and over half (56 percent) were located in high-poverty districts. Forty-six percent of schools were located in urban districts, with the remainder split relatively evenly between suburban and rural districts.

ERS researchers conducted a second analysis to identify characteristics that independently increase—or decrease—the probability that a school would offer the NSLP After-School Snack Program. Schools with a higher share of students receiving free or reduced-price lunches were more likely than other schools to offer the program, along with schools in urban areas and high-poverty districts. Elementary schools were more likely to offer the program as well, whereas high schools were less likely. Other school characteristics, such as the number of students enrolled and involvement in a nutrition wellness initiative, did not appear to independently affect the likelihood that a school would participate in the program. 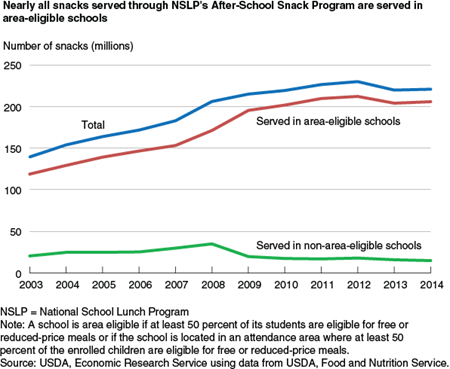 “School and District-Level Characteristics Associated With Participation in the After-School Snack Component of the National School Lunch Program,” by Joanne Guthrie and Clare Cho, Journal of Hunger & Environmental Nutrition, 10(2): 176-188, January 2015