In addition to their meat, cattle and hogs produce a number of byproducts when they are slaughtered, such as organs, bones, and hides/skins. ERS does not calculate retail values for these parts, but the price-spread tables do include estimated byproduct values at the wholesale levels.

Meat price spreads convey critical information to producers, wholesalers and consumers about the distribution of costs along the marketing chain and the efficiency of producers and processors in transforming livestock to retail meat. A decline in farm prices, for example, can suggest a decrease in production costs due to technological advances or a drop in feed prices. Similarly, improvements in meat processing technology could translate to lower wholesale to retail price spreads, meaning higher prices received by producers and/or lower prices for consumers.

The meat price spreads data are also widely used by producers, consumers, and economists as “benchmarks” for national average meat prices. The data enable producers to know how the prices they receive compare with retail prices and enable consumers to know the margin they pay for the meat they purchase in retail stores. Finally, producers and industry analysts use the price spreads data to monitor market performance and consumer demand for various meat types and, ultimately, for livestock.

What do meat price spreads say about prices over the last decade?

Wholesale to retail prices for Choice beef have been trending upward since 2000, while wholesale to retail prices for pork began to rise only in 2012. However, farm-to-wholesale prices for both beef and pork have been stable. In early 2015, beef retail prices increased, hitting a record high of $6.41 per pound in May. Although prices have moderated since then, they remain high. Meanwhile, retail pork prices declined throughout the first half of the year, reaching $3.70 per pound—about 12 percent lower than the record price seen in September 2014. Elevated beef prices are primarily the result of tight domestic supplies. Drought conditions and the resulting high feed prices in 2008-12 led to decreasing inventories and higher prices for both cattle and hogs. But as feed prices began to fall, hog production started to rebound and pork prices declined. Cattle production, however, has been slow to recover due to the longer life cycle of cattle. 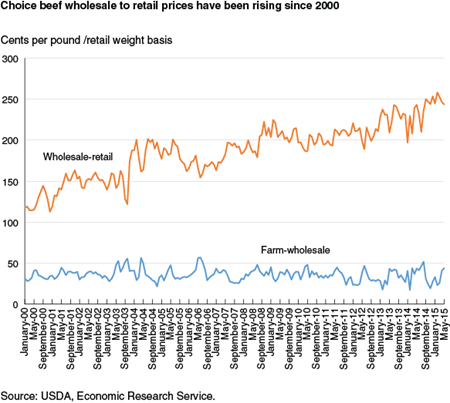 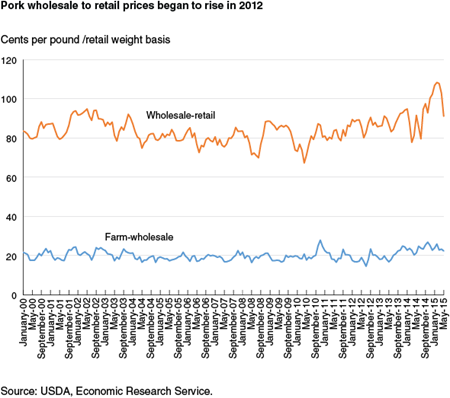