In the 20 years since their commercial introduction, genetically engineered (GE) seeds have become increasingly common in U.S. agriculture. Herbicide-tolerant (HT) crops were developed to survive the application of certain effective herbicides (such as glyphosate and glufosinate) that previously would have destroyed the crop along with the targeted weeds. Insect-resistant crops contain a gene from the soil bacterium Bacillus thuringiensis (Bt) that produces a protein toxic to specific insects, protecting the plant over its entire life. The USDA’s National Agricultural Statistics Service June Agricultural Survey (which is published in an annual report entitled Acreage) refers to seeds that have both herbicide-tolerant and insect-resistant traits as “stacked.” A recent analysis of these data shows that the adoption of stacked corn varieties has increased sharply, from 1 percent of U.S. corn acres in 2000 to 77 percent in 2015. Adoption rates for stacked cotton varieties have also grown rapidly, from 20 percent in 2000 to 79 percent in 2015.

Generally, many different GE traits can be stacked. For instance, when insect-resistant corn seeds were commercially introduced in 1996, they only controlled one pest: the European corn borer. Since then, plants with resistance to corn rootworms (2003) and corn earworms (2010) have been developed and commercialized; some seeds are “stacked” with all three of these traits. Plants that tolerate multiple herbicides have also been introduced. For example, certain stacked corn varieties tolerate both glyphosate and glufosinate. Varieties with three or four GE traits are now common.

Recent research suggests that stacked corn seeds have higher yields than conventional seeds or seeds with only one GE trait. For example, an analysis of the 2010 USDA Agricultural Resource Management Survey (ARMS) showed that conventional corn seeds yielded 134 bushels per acre in 2010. In contrast, seeds with two types of herbicide tolerance (glyphosate and glufosinate) and three types of insect resistance (corn borer, corn rootworm, and corn earworm) yielded 171 bushels per acre. 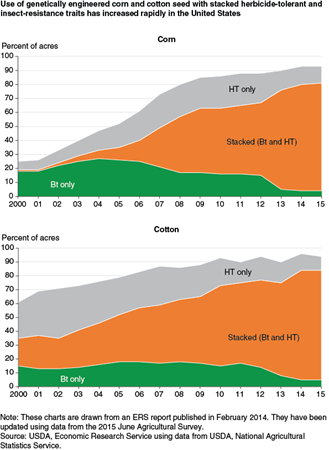