Adoption of Genetically Engineered Crops by U.S. Farmers Has Increased Steadily for Over 15 Years

Genetically engineered (GE) crops with pest management traits first became commercially available for major crops in 1996. More than 15 years later, adoption of these crop varieties by U.S. farmers is widespread (170 million acres planted in 2013), and many products derived from these GE crops—including cornmeal, oils, and sugars—are commonly used in food products. While some GE seeds with traits that affect a crop’s nutritional content and agronomic properties are already being commercialized and many more GE seeds are under development and testing, nearly all the GE seeds marketed to date to U.S. farmers are for pest management (pests here are defined to include insects, weeds, and some other organisms that interfere with the production of crops). Herbicide-tolerant (HT) seeds allow farmers to use certain effective herbicides to control weeds without damaging their crop. Other GE seeds leverage pesticidal proteins, naturally produced by the soil bacterium Bacillus thuringiensis (Bt), that are toxic to certain insects, protecting the plant over its entire life. 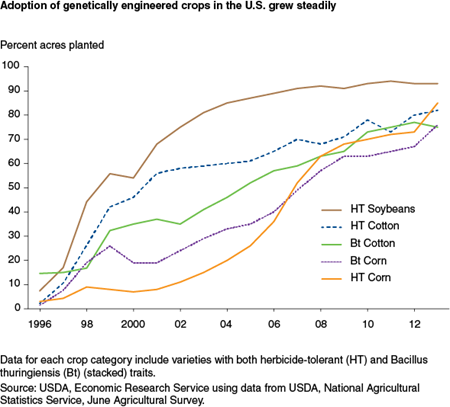 While corn, cotton, and soybeans account for the vast majority of GE acreage in the U.S., other GE crops commercially grown include HT canola, HT sugar beets, HT alfalfa, virus-resistant papaya, and virus-resistant squash. Since being commercially introduced, the varieties of GE seeds commercially available with pest management traits have increased in complexity, incorporating resistance to a broader range of insects and tolerance to more herbicides, as well as combining (or “stacking”) both HT and Bt traits. With these innovations, the price of GE seeds increased, both in nominal and real terms. The rapid adoption of GE varieties by farmers is consistent with the belief that GE seeds provide improved performance or other benefits that make their use worthwhile, but what do research findings suggest?

In the absence of pests, commercially available GE seeds do not increase maximum crop yields. However, by protecting a plant from certain pests, GE crops can prevent yield losses to pests, allowing the plant to approach its yield potential. Bt crops are particularly effective at mitigating yield losses.

Not surprisingly, adoption rates of stacked-seed varieties have increased quickly. Use of stacked corn seed grew from 1 percent of planted acres in 2000 to 71 percent in 2013. GE varieties incorporating three or four traits are now common. 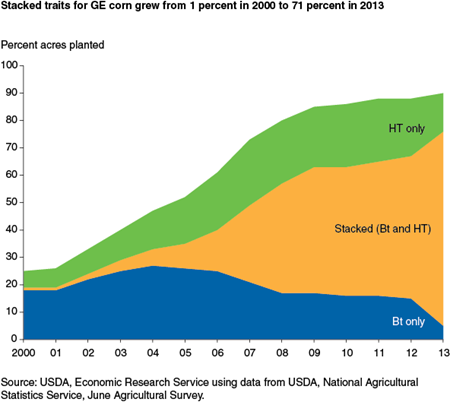 The market price of seed incorporates the costs associated with seed development, production, marketing, and distribution. The price of GE soybean and corn seeds grew by about 50 percent in real terms (adjusted for inflation) between 2001 and 2010. The price of GE cotton seed grew even faster. The increase in GE seed prices can be attributed in part to increasing price premiums over conventional seeds associated with the rising share of GE seeds with multiple (stacked) traits and /or more than one mode of action for particular target pests Another factor contributing to the increase in seed prices is the improvement in seed genetics (germplasm).

The profitability of GE seeds for individual farmers depends largely on the value of the yield losses mitigated and the pesticide and seed costs, which vary by crop and technology. Most studies show that adoption of Bt cotton and Bt corn is associated with increased net returns/variable profits. However, some studies of Bt corn show that profitability is strongly dependent on pest infestation levels (adoption of Bt cotton and Bt corn was associated with increased returns when the pest pressure was high).

The fact that adoption of HT crops has been continuously rising, even though several researchers found no significant differences between the net returns of adopters and non-adopters, suggests that adopters derive other benefits. In particular, weed control for HT soybeans may be simpler and more flexible (e.g., HT seed-based production programs allow growers to use one product to control a wide range of both broadleaf and grass weeds instead of using several herbicides to achieve adequate weed control), freeing up valuable management time for leisure, or to generate enterprise growth or off-farm income.

ERS research shows that HT adoption is associated with increased off-farm household income for U.S. soybean farmers, most likely because time savings associated with HT crops were used in off-farm employment. More recently, other researchers confirmed that GE crops led to household labor savings and that farmers adopting GE crops derived value from the convenience, flexibility, and increased worker safety associated with growing HT crops that enable them to use fewer toxic herbicides.

Adoption and pesticide use

Studies based on field tests and farm surveys have examined the extent to which GE crop adoption affects pesticide (insecticide and herbicide) use, and most results show a reduction in pesticide use. A 2010 National Research Council study concurred that GE crops lead to reduced pesticide use and /or to use of pesticides with lower toxicity compared to those used on conventional crops.

Generally, Bt adoption is associated with lower levels of insecticide use. Pounds of insecticide (per planted acre) applied to corn and cotton crops have decreased steadily over the last 10 years (except for cotton in 1999-2001, when application levels were distorted during the boll weevil eradication program).

Insecticide use trends suggest that insect infestation levels on corn and cotton farms were lower in 2010 than in earlier years and are consistent with the fact that European corn borer populations have steadily declined over the last decade. In addition, several researchers have shown that areawide suppression of certain insects such as the European corn borer and the pink bollworm are associated with Bt corn and Bt cotton use, respectively. This suggests that Bt seeds have benefited not only adopters but non-adopters as well. 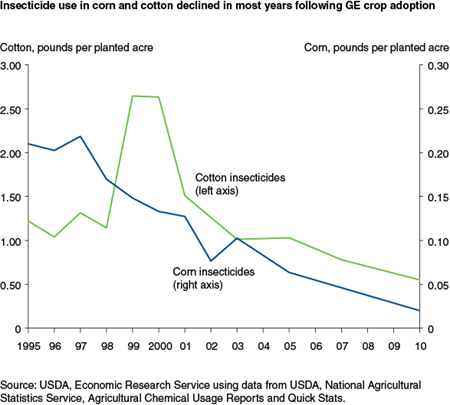 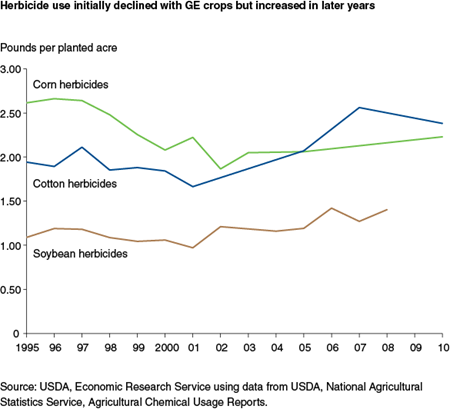 Herbicide use on corn, cotton and soybean acres (measured in pounds per planted acre) declined slightly in the first years following introduction of HT seeds in 1996, but increased modestly in later years. Despite the relatively minor effect HT crop adoption has had on overall herbicide usage, HT crop adoption has enabled farmers to substitute glyphosate (which many HT crops are designed to tolerate) for more traditional herbicides. Because glyphosate is significantly less toxic and less persistent than traditional herbicides, the net impact of HT crop adoption is an improvement in environmental quality and a reduction in health risks.

By 2006, approximately 86 percent of HT soybean planted acres were under conservation tillage, compared to only 36 percent of conventional soybean acres. Differences in the use of no-till were just as pronounced. While approximately 45 percent of HT soybean acres were cultivated using no-till technologies in 2006, only 5 percent of the acres planted with conventional seeds were cultivated using no-till techniques, which are often considered the most effective of all conservation tillage systems. Cotton and corn data exhibit similar though less pronounced patterns. 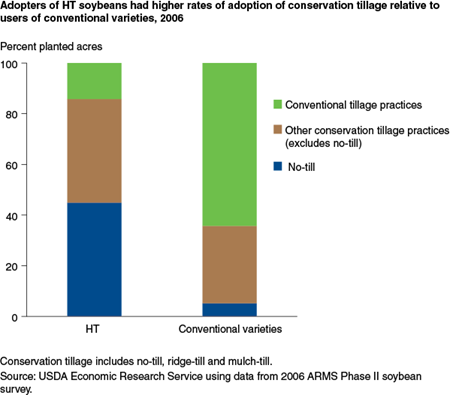 The acceptance of GE crops by farmers has been due, in large part, to the pest management traits incorporated into GE seeds. Farmers were willing to adopt GE seeds because their benefits exceeded their costs, while domestic consumers were largely indifferent to these traits. But how long can farmers expect to benefit from the pest management traits engineered into the seeds currently commercially available? And, what other traits might be engineered into seeds that would attract farmer and consumer interest?

As with other efforts to control agricultural pests, pests will inevitably develop resistance to the pest management traits incorporated in GE seeds. Prior to the commercial introduction of Bt crops, entomologists and other scientists persuasively argued that mandatory minimum refuge requirements (planting sufficient acres of the non-Bt crop near the Bt crop) were needed to reduce the rate at which targeted insect pests evolved resistance. Analysis of more than a decade of monitoring data suggests that minimum refuge requirements and natural refuges have indeed helped delay the evolution of Bt resistance in some insect pests. However, Bt resistance in western corn rootworm, cotton bollworm, and fall armyworm populations leading to reduced efficacy of Bt corn and Bt cotton has been recently documented in some U.S. crop fields.

Likewise, an overreliance on glyphosate and a reduction in the diversity of weed management practices by HT crop producers contributed to the evolution of glyphosate resistance in 14 weed species in the United States. Because no new major classes of herbicides have been made commercially available in the last 20 years, and because few new ones are expected to be available soon, growing resistance to glyphosate is expected to reduce the benefit farmers derive from using the most widely available HT seed varieties. Furthermore, the weed management practices needed to slow the spread of glyphosate-resistant weeds may themselves reduce the short-term benefits of planting glyphosate-tolerant (i.e., HT) seeds. As a result, their benefits may erode over time in the absence of further developments affecting HT seeds and their associated herbicides and/or improvements in weed management practices. One such development is the introduction of crops tolerant to the herbicides dicamba and 2, 4-D if used in the context of a diversified approach to weed management. 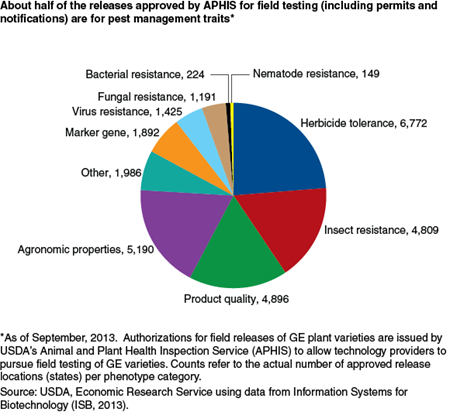 While relatively few GE traits are currently commercially available, the number of field releases to test GE varieties approved by USDA’s Animal and Plant Health Inspection Service indicates continued GE-related R&D activities since field testing is a critical part of seed development. The number of field releases grew from 4 in 1985 to 1,194 in 2002 and has since averaged around 800 per year. Other measures suggest that GE-related R&D activity has increased dramatically since 2005.

New HT and insect resistance traits may give farmers more pest management options and slow the spread of pesticide resistance among pest populations. Approval of other “first generation” traits that improve yields or reduce yield losses could result in further adoption of GE varieties. Farmer response to the approval of “second generation” traits that alter end product quality may be more cautious. Farmers can expect to benefit from the adoption of these GE traits only if consumer acceptance is assured. In short, the future of GE seed use depends on the ability of farmers to adopt best management practices, the ability of biotech companies to develop new GE varieties, and consumer acceptance of products from GE sources.