The increase in R&D performed by global agricultural input industries (see 'Private Industry Investing Heavily, and Globally, in Research To Improve Agricultural Productivity' in the June 2012 issue of Amber Waves) has coincided with significant changes to the structure of these industries. The largest firms have increased their market shares and account for most of the investment in (and ownership of) new innovations in these industries. Implications of market concentration in the U.S. seed industry were addressed earlier in Amber Waves and in other ERS research (see suggested readings). New ERS data allow a closer look into global market concentration across a number of agricultural input industries.

Since the 1990s, global market concentration (the share of global industry sales earned by the largest firms) has increased in the crop seed/biotechnology, agricultural chemical, animal health, animal breeding, and farm machinery industries - all of which invest heavily in agricultural research. By 2009, the largest four firms in each of these industries accounted for at least 50 percent of global market sales. Market concentration was particularly high in animal genetics and breeding, where the four-firm concentration ratio reached 56 percent in 2006/07 (the latest year for which data are available). Growth in global market concentration over 1994-2009 was most rapid in the crop seed industry, where the market share of the four largest firms more than doubled from 21 to 54 percent. The top eight firms in all five input sectors had between a 61- and 75-percent share of global market sales by 2009.

Firms increase their market share either by expanding their sales faster than the industry average or by acquiring or merging with other firms in the industry. Firms can expand their sales faster than others in the industry by offering better products or services (often an outgrowth of larger R&D investments), improving their marketing ability, or offering lower prices (often through economies of scale). The leading input firms in 2010 had faster sales growth than the industry average, but a significant amount of that growth came from acquisitions of other firms. 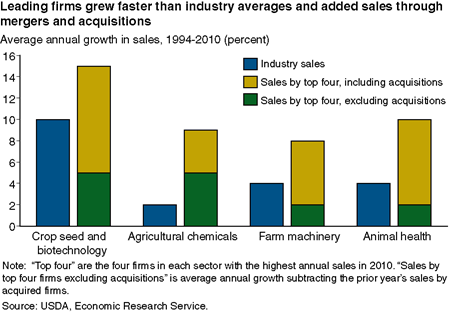 Reasons for mergers and acquisitions vary by industry and firm circumstances but include market forces and the emergence of new technologies. Government policies can also affect the ability of firms to compete in markets and their incentives to merge with or acquire other firms.

In 2009, seven large seed companies each had annual seed sales of over $600 million. Five of these top seed companies--Syngenta, Bayer, Dow, Dupont, and Monsanto--are also market leaders in agricultural chemicals. A sixth firm, BASF, is making significant investments in crop biotechnology research but so far reports few crop seed or trait sales, although it is a market leader in agricultural chemicals. These companies currently constitute the 'Big 6' involved in crop seed, biotechnology, and chemical research.

The seed-biotechnology industry has been reliant on small and medium-sized enterprises (SMEs) as sources of new innovation. New SME startups (often spinoffs from university research) tend to specialize in commercial development of a new research tool, genetic trait, or both. Significant entry by SMEs into the seed-biotechnology sector began in the late 1970s and early 1980s, with a second wave of new entrants in the late 1990s and early 2000s. In recent years, exits have outnumbered entrants, and by 2008 just over 30 SMEs specializing in crop biotechnology were still active. The majority of the exits from the industry were the result of acquisition by larger firms. Of 27 crop biotechnology SMEs that were acquired between 1985 and 2009, 20 were acquired either directly by one of the Big 6 or by a company that itself was eventually acquired by a Big 6 company.

Concentration in a research-intensive industry can be measured not only in terms of share of product sales but in share of new innovations. Firms that are most successful in creating new innovations are often better positioned to dominate the market (although not all new product introductions will be commercially successful). In research for genetically engineered crop varieties, for example, companies typically obtain a patent first, then initiate field trials, and finally obtain regulatory approval to sell crop seeds. Although there is considerable overlap in terms of companies participating, the markets for crop seeds can be distinguished from markets for genetically modified traits. The shares of these research outputs held by the Big 6 companies in each case are between 55 and 95 percent.

Consequences of Concentration For Agricultural Innovation

The rising concentration in global agricultural input markets means fewer firms are supplying those inputs to farmers. It also means that fewer firms are responsible for many of the new innovations that drive growth in agricultural productivity. The share of private R&D performed by the largest firms is even larger than their share of sales. In crop seed and biotechnology, eight seed-biotechnology companies accounted for 76 percent of all R&D spending by this industry in 2010. In agricultural chemicals, five companies (each with over $2 billion sales in 2010) were responsible for over 74 percent of the R&D in this sector. In farm machinery, four companies (each with over $5 billion in farm machinery sales) accounted for over 57 percent of farm machinery R&D, and in animal health, just eight companies accounted for over 66 percent of R&D. Moreover, all of these leading firms are multinational companies with R&D facilities positioned around the world. These global research networks allow large firms to develop and adapt new technologies to local conditions, meet national regulatory requirements for new product introductions, and achieve cost economies in some of their R&D activities.

Greater market power resulting from the structural changes in agricultural input industries means that farmers may pay higher prices for purchased inputs. With stronger legal protection over their intellectual property and fewer firms offering competition, firms can charge higher prices for their new innovations. Such price premiums are necessary to provide firms the means (and incentive) to invest in R&D in the first place, and farmers are willing to pay higher prices so long as the gains from higher productivity outweigh their higher costs. In fact, for the past two decades, the prices of farm inputs have been rising faster than the prices U.S. farmers receive for their crops and livestock. 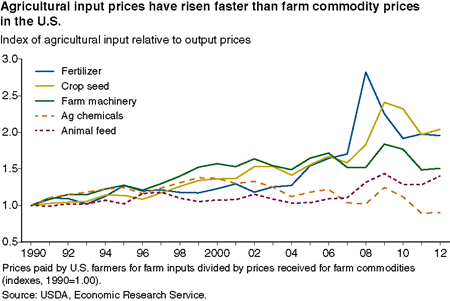 The largest increase over 1990-2010 was in crop seed prices, which more than doubled relative to the price received for agricultural commodities. This increase was due, at least in part, to the value of the new seed traits resulting from research investments made by seed/biotechnology companies. However, higher input prices may also stem from increases in the prices of labor, capital, energy, and other materials used in their manufacture. The sharp rise in the price of fertilizer in 2008-09 was driven by a significant increase in the cost of energy and materials used to make fertilizers, higher transportation costs, and the falling value of the U.S. dollar. Multiple factors contribute to changing prices for farm inputs, and it is difficult to isolate the effects of market power, product quality, and other factors affecting these prices.

The growing concentration in agricultural input industries raises a number of issues. One is the inherent tension between public policies regulating intellectual property rights (IPR) and market competition. While antitrust laws restrict firms from exercising monopoly power, some exceptions are made for intellectual property rights over new innovations. However, antitrust rules may still apply to how firms license their intellectual property to other firms. Another issue is whether under the current market and policy environment there are significant economies of scale in crop and animal biotechnology, implying that only very large firms can hope to compete effectively in these sectors. This might mean there is a significant barrier to entry for new firms and a potential loss of new innovations, particularly from SMEs. On the other hand, the global reach of the large, multinational agricultural input firms could speed up the rate of international technology transfer and help to close the productivity gaps between regions and countries. The rate of transfer will be influenced by international trade agreements and how countries regulate and protect IPR in new agricultural innovations, especially those involving genetically modified organisms. Finally, public investments in research can be an important enabler of market competition. Examples include public provision of elite parent material for crop/livestock breeding companies and the basic scientific tools necessary for commercial development using genomics and molecular biology.

'Competition Issues in the Seed Industry and the Role of Intellectual Property', Choices, February 2010, Vol. 25, No. 2.