A Market for U.S. Distillers Dried Grains Emerges in China

by Michael Jewison and Fred Gale

China has become an important export destination for U.S. distillers dried grains with solubles (DDGS), the main co-product from ethanol production. About a fourth of U.S. DDGS output is exported, and China accounted for nearly 20 percent of those exports in 2010/11. Expansion in U.S. DDGS production through greater ethanol use has provided an opportunity to meet expanding Chinese demand for imported feed ingredients, while also raising the value of DDGS co-products to U.S ethanol producers.

DDGS are among the many ingredients used by China's animal feed industry. Commercial feed production in China has grown rapidly, rising from under 36 million metric tons (mmt) in 1991 to 169 mmt in 2011. The fast-paced growth of the industry is attributed to rising meat consumption in China and a shift from backyard production of livestock to commercial operations. Demand for feed ingredients is expected to remain robust to support the projected 7.6-mmt annual growth in feed output called for in the Chinese Government's latest 5-year plan.

Future U.S. DDGS exports to China could be constrained by slower expansion in U.S. corn-based ethanol production. According to the latest USDA baseline projections, DDGS output will grow more slowly during the coming decade--U.S. corn used for ethanol is expected to grow only 11 mmt over the next 10 years, much slower than the 110 mmt growth between 2000/01 and 2010/11. This reflects slower expected growth in blended gasoline consumption in the United States and technical constraints on the use of higher proportions of ethanol blended with gasoline. Slower growth in ethanol output suggests that the supply of U.S. DDGS available for export to China and other countries will also expand at a slower rate.

Export sales to China also depend on the cost of U.S. DDGS relative to that of alternative feed inputs. With corn prices on the rise, a growing number of Chinese feed mills find DDGS from the United States to be a cost-effective alternative. A low tariff and an exemption from value-added tax add to the appeal of DDGS imports to Chinese buyers. Feed mills, however, are constantly weighing the prices of various raw materials. A dip in the prices of alternatives, like corn and feed-quality wheat, could dampen enthusiasm for U.S. DDGS. Imports of these other grains are currently limited by annual quotas.

Imported DDGS still play a relatively bit part in China's feed industry--imports accounted for about 2 percent of China's manufactured feed output in 2010. But the emergence of this trade is a reminder that a wide variety of U.S. commodities and products can meet China's growing demand for feeds. 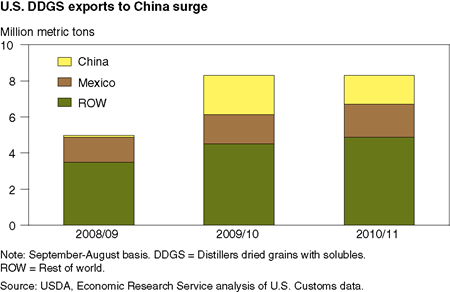