Environmental Quality Incentives Program (EQIP) Organic Initiative (Title II)—Conservation practices related to organic production and transition continue to be eligible for payments under an EQIP provision of the 2008 Farm Act. Payment limits for organic and transitional farmers under this provision are increased from $80,000 during a 6-year period to $140,000 during the 5-year period of the 2018 Farm Act. Payments remain capped at a lower level than in the regular EQIP program, although organic and transitioning farmers may also apply for assistance through the general EQIP program. While both programs are competitive, producers compete against fewer applicants in the organic program.

Funding under Conservation Stewardship Program (CSP) (Title II)—Adds funding to States to support organic and transitioning farmers under CSP; funding allocation is based on the number of certified and transitioning operations and acres within States.

Market access for organic exports (Title III)—Clarifies that commodities that are organically produced are included in the Market Access Program, which encourages the development, maintenance, and expansion of export markets for U.S. agricultural commodities.

Organic research grant program gets permanent funding (Title VII)—Permanent (baseline) funding is established for the Organic Agriculture Research and Extension Initiative (OREI), USDA’s major extramural organic grant program. Mandatory annual funding remains at $20 million in FY 2019 and grows to $50 million by FY 2023 and remains at $50 million in each year after that.

National Organic Program (Title X)—Several new provisions are added to improve the enforcement of USDA’s organic standards and certification. Authorization for appropriations increases from $16.5 million in FY 2019 to $24 million in FY 2023 under the 2018 Farm Act, totaling $100.5 million over the life of the act—up from $75 million total between FY2014 and FY2018.

National Organic Standards Board (NOSB) (Title X)—The Organic Foods Production Act created the NOSB as a Federal board to advise on a wide range of issues involving the production, handling, and processing of organic products. The 2018 Act clarifies that an employee of a farmer can serve as a member of NOSB, and codifies current NOSB voting procedures for making changes to the list of materials that are acceptable in organic production.

U.S. organic retail sales reached a new record in 2017 of $49.4 billion, up nearly 6.5 percent from the previous year according to industry estimates—and organic demand continues to outstrip supply in many organic commodity sectors. Greater Federal support could mean more organic farms and production as U.S. consumer demand continues to grow.

Bolstering consumer confidence in the "USDA Organic" label. Many consumers have come to rely on the “USDA Organic” label. Consumers cannot visually distinguish organic food from conventional, and must rely on labels and other advertising tools for product information. Congress passed the Organic Foods Production Act of 1990 to establish national organic standards that facilitate marketing and provide consumer assurance. USDA finalized rules to implement this legislation in 2000.

Enforcement challenges have grown along with the size of the U.S. organic industry, and the 2018 Farm Act substantially increases authorized funding for the USDA regulatory program to help maintain consumer confidence in the organic label. Farmers in over 100 countries are now producing food for the U.S. organic market. Congress also added a number of new provisions in the 2018 Farm Act to improve detection of fraudulent imports and enforcement of organic regulations.

Increasing research on organic production systems. The value of U.S. organic farm sales more than doubled between 2011 and 2016, to $7.6 billion, according to findings from USDA surveys, and the organic share of total agricultural sales increased from 1 percent to over 2 percent during that period. Congress boosted funding for organic research in previous legislation as the organic farm sector expanded. The 2018 Farm Act creates permanent funding status, and provides nearly $400 million in funding for USDA's extramural grant program, the Organic Agriculture Research and Extension Initiative (OREI), over the next 10 years to help solve the unique challenges of organic production.

Challenges in the organic production sector are often region- and crop-specific, and the expansion of funding in the 2018 Farm Act, along with its new permanent funding status, will help researchers address many research needs.

While organic farming systems were used on approximately 6 percent of U.S. acres for vegetables in 2015, they were used on under 0.3 percent of U.S. corn and soybeans acreage. U.S. field crop producers have been especially slow to adopt organic practices, even though a recent ERS study based on national survey data found that the higher economic costs of producing organic corn and soybeans were more than offset by the higher prices for these crops. Reasons for sluggish adoption include the 3-year transition period required before earning organic price premiums and the relative ease of producing for the conventional market, with inputs readily available from local dealers and established markets at the local elevator. 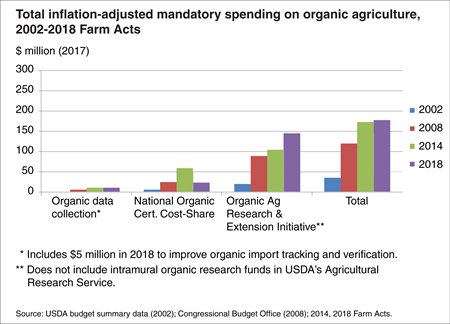