Agricultural Conservation Easement Program (ACEP)—Funding is provided for long-term easements for the restoration and protection of onfarm wetlands and protection of eligible agricultural land from conversion to nonagricultural uses. ACEP consolidates the functions of the Wetlands Reserve Program, the Grassland Reserve Program (easement portion), and the Farmland Protection Program. All land enrolled in these programs on the date of enactment of the 2014 Farm Act will be considered enrolled in ACEP. Annual funding is significantly less than that provided for ACEP predecessor programs in the 2008 Farm Act.

Conservation Stewardship Program (CSP)—Program continues financial assistance to producers who meet stewardship requirements on agricultural and forest lands. The 2014 Farm Act raises the bar for CSP enrollment to meeting the stewardship threshold for two resource concerns. Annual enrollment is set at 10 million acres, down from 12.769 million acres under the 2008 Farm Act.

Crop Production on Native Sod (“sodsaver”)—For producers who choose to till native sod, provision would reduce crop insurance premium subsidies and limit the yield or revenue guarantee available during the first 4 years of crop production on native sod that had not been previously tilled. Some limitations would also apply to noninsured crop disaster assistance. The new provision applies only to native sod in Minnesota, Iowa, North Dakota, South Dakota, Montana, and Nebraska.

Wildlife Habitat Incentive Program is merged into the Environmental Quality Incentives Program, with at least 5 percent of funds set aside for wildlife habitat-related practices.

Noneasement functions of the Grassland Reserve Program will be carried out through the Conservation Reserve Program (grassland enrollment of up to 2 million acres is authorized).

The Congressional Budget Office (CBO) estimates that between 2014 and 2018, mandatory spending on USDA conservation programs will decline by $200 million, or less than 1 percent of the $28 billion that CBO projects would have been spent had the 2008 Farm Act been continued through 2018. These funding levels, however, are not guaranteed. Conservation funding has been reduced from initial levels mandated by previous Farm Acts. 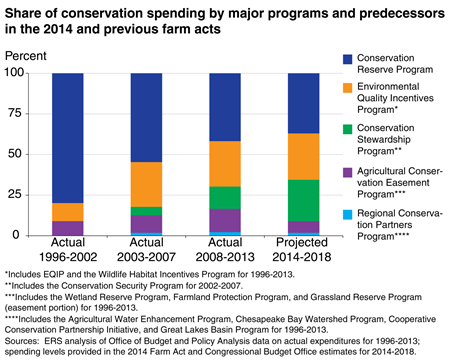 While the new CRP acreage cap cuts maximum enrollment by 25 percent, the impact on program enrollment and related environmental benefits may be relatively modest. CRP acreage has been declining since 2007, falling from 36.8 million acres to 25.6 million—30 percent—by December 2013. Environmental benefits, however, may not be diminishing as quickly as the drop in enrolled acreage might suggest. CRP has shifted rapidly from enrolling whole fields or farms (through general signup) to funding high-priority, partial-field practices, including riparian buffers, field-edge filter strips, grassed waterways, and wetland restoration (through continuous signup). On a per-acre basis, these practices are believed to provide greater environmental benefits than whole-field enrollments while taking less land out of crop production. Because partial-field practices are more expensive, however, CRP annual payments have fallen by only 10 percent since 2007. At the end of 2013, the average annual payment for partial-field practices was $103 per acre, versus only $50 per acre for whole fields. 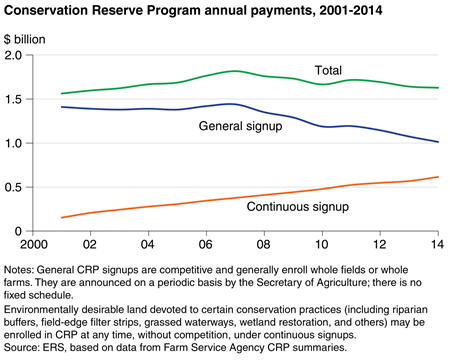 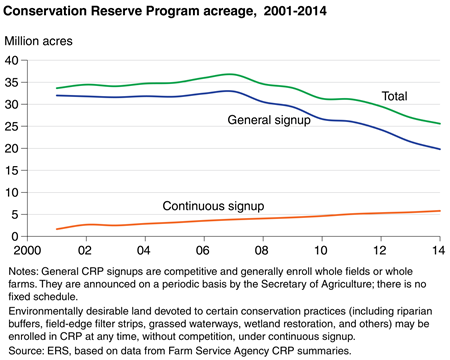 Funding for new wetland easements—an important component of agricultural conservation policy under the 2002 and 2008 Farm Acts—is likely to decline under the 2014 Farm Act. In particular, funding for the Wetlands Reserve Program (WRP) was increased in the 2002 and 2008 Farm Acts, while the 2014 Farm Act merges WRP functions into ACEP but at much lower funding. Even if all ACEP funding for the next 5 years was devoted entirely to wetland protection, it would be only 73 percent of WRP funding under the 2008 Farm Act, and doing so would leave functions previously covered by the Farmland Protection Program and the Grassland Reserve Program unfunded. 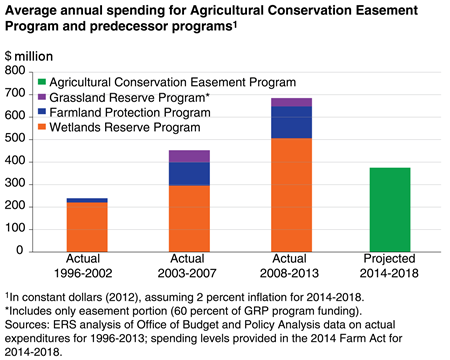 Errata: On October 30, 2017, this chart was reposted to correct the axis label to $ million. 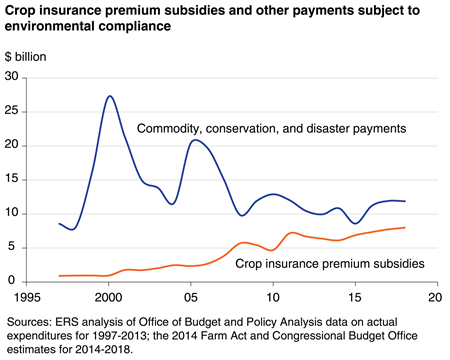